Book Review: The Genius of Indraprastha by Harshwardhan

The Genius of Indraprastha by Harshwardhan is a historical novel set in ancient Indian land with provinces like Gondwana, Hastinapur, and so on. This is the first book in the Gondwana Chronicles. The novel stretches over 350 pages, but reads like a sweeping saga – the intensity and pace of the novel are brilliantly done. 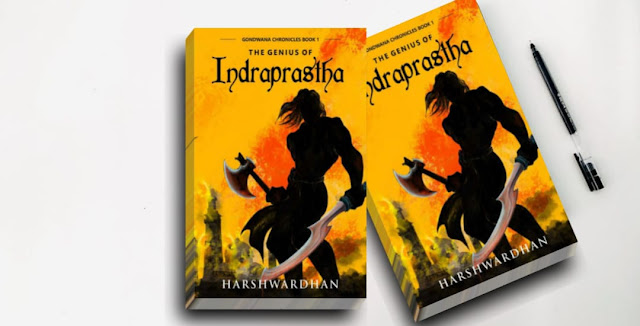 Since the novel is lengthy, thus it takes time to settle down with its characters and backdrop. The author has used flashback technique in snatches. In fact, most of the adventure and plot-driven scenes take place in sweeps and past events. The story opens with Khidmatgars in possession of some silver chest. As the story chugs ahead, a lot of conflict areas lay open before the readers.

Khidmatgars are foreigners in Gondwana land. They come from the deserts of Arabia, ‘Khidmatgars’ mean slaves. Their commander is Bakht Khan – he is famous for his unusual sanguinary fight at Uno selection and victories. He is a powerful character in the form of an antagonist. The author provided two narratives, one from the Khidmatgars camp, and second from the native people of Gondwana that comprises of many tribes including the powerful and wise Aryans. Tribal fights or provincial battles are not fought without proper preparation and ancient lineage. Thus, there are many local jargons and terms such as Uno, council, Saptasindhu Mandal, and some more. The readers will not have difficulty if they delve deep into the story, soon they will be familiar with all things running here and there.

The novel starts at one end and finishes on a cliffhanger point. There is a lot of history that runs like banter in the backdrop. Broadly, due to business interest and territorial conflicts Khidmatgars try to settle down in Gondwana region. One of the major reasons is their need for fresh and drinkable water.

When Khidmatgars try to conquer the overall land of Gondwana, all tribes come together. The last time it happened was more than two decades ago. For much part of the novel, Bakht Khan and Agnivesh seem to steer the plot, however, things change drastically midway when the prince of Hastinapur, Martand, takes everyone by storm. He was a sort of larger-than-life character – brave and bold with aggressive fighting techniques.

The major crux of the novel lies in the power of knowledge. There are some scrolls that hold the formulae or say secrets of weapons and battles. If learnt properly, that side can win any land easily. Khidmatgars get hold of the scrolls but will they be able to get something valuable from them? The knowledge of scrolls can power-up any side…but it again depends who can manage and protect and use them.

The novel’s story may look fragmented due to mentioning of various tribes and provinces. However, in its true stance, it is about wars and winning lands for the convenience of their people. India has always been vulnerable to foreign invaders be it any century. Harshwardhan has weaved a powerful yet credible story of BC era. Could it be possible that time people from Arabia land tried to get into ancient India which was divided into provinces. Full of action, drama, melancholy and lineage – this novel is a pure treat to read and gives a new perspective about historical novels with a touch of mythological era.

Harshwardhan writes fairly unbiased. His imagination and research work has produced up a fantastic piece of literature. With no grammar or edit mistakes, the novel sails ahead in a lucid and easy-to-grasp manner.