Exit Game by Vidit Chopra is a riveting technically-oriented science fiction. The book takes us to a possible future that may encounter us in a couple of decades or in the next century. Those who are familiar with today’s trending technologies like AI, ML, VR, and so on will gel up with the main storyline immediately. However, laymen readers might face some challenges in grasping the full book in one go. Despite its high-tech level, the novel is gripping and keeps the readers hooked till the last page. 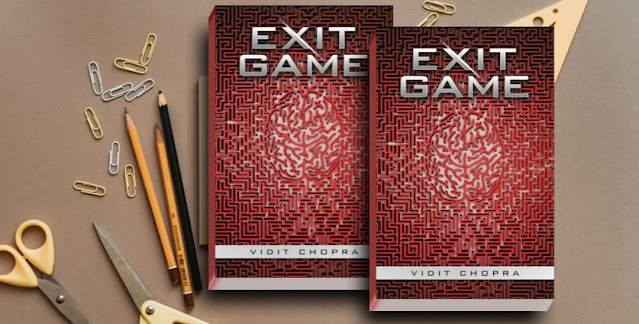 Broadly, the story is between two people Ahmed (also known as Professor) and Genie. There is this company called Captivate Tech. It builds immersive and reality-altering games. It has mass following and it literally rules the world with their powerful products. However, once a former employee of the same company, Ahmed knows the ulterior motive of the company. Ahmed doesn’t know whether this company is run by a bunch of people or a single mind. Whosoever they or he is – it is called Genie.

Games launched by Captive Tech are creating ‘illusion and reality’ dysfunction among its users. When users play the game by using virtual reality technology, they are unable to distinguish between game life and the reality surrounding them. There have been some instances of shooting owing to these immersive games. The games are becoming perilous and detrimental for people, and especially children. Ahmed knows that if the same continues, the world will be caught in a civil war like situation.

Captivate Tech’s flagship game is Project Genesis. In this game, users can play using their or others clone. The pain afflicted in the game will be felt in reality. It is way dangerous game than anyone could think. The only way to stop this company from bringing devastation to the world is to find the mind behind it. And it is Genie. He appears from time to time…but in digital avatar of hologram.

To hunt down Genie, Ahmed forms a team called Collective, which has members like Sharon, Jeremy, Dr Lebowitz, etc. But the task is extremely difficult as one need to be many steps ahead than Genie and its immaculate coding. Will Ahmed and his team be able to decode and hunt Genie and bring down the popularity of Captivate Tech?

The backdrop of the novel is not our current world – it is way different – it is being ruled and run by VR, AR, simulation, Clone, high-tech transportation, pods, and so on. The novel has stunning action and drama scenes, and its backdrop is laced with technology that a layman today can’t even imagine. The story line is technically sound and advanced, but still it brings the conflict of human nature and aspirations. Someone called Genie wants to rule the world, while an erudite professor wants to avert the danger for the sake of humanity.

Readers from non-tech background may need to check Google over and again to grasp the meaning of tech jargons like immersive technology, VR syndrome, simulation environment, and some coding terms. It’s a different sci-fi that blends the basic psychological nature of human with very advanced digital world.

Vidit’s writing style and narration is superb. Mixing of subplots into main storyline is sublime and subtle. With no editing or grammar mistakes, this novel is going to stay longer as the world is already embracing the life-changing technologies gradually.