Two things to note about this novel… First, Anagha Ratish is a master storyteller, and secondly the novel is way beyond engaging than the normal genre of fantasy. Yes…it is a fantasy novel set in the world of pixies, magical powers, queer worlds, captivating kingdoms with lust of power, and what not. 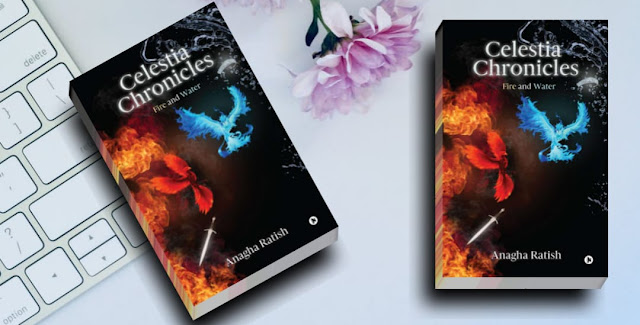 Going by the title, one gets clear perception that this is the first book in Celestia Chronicles, putting a riveting and adventurous action between fire and water. Broadly, it’s about two powers: fire and water. The former is evil while the later one has to save innocents from the marauding cruelty of Queen Zyra – the epitome of fire.

The protagonist in the novel is Adaire. She is a human who stumbles upon the world of pixies. There she is confronted by important auxiliary characters like Sapphire and Faye, who are pixies, natives of Celestia. However, on the other hand, the queen of Emberglass causing havoc on its own people. She burns everything if gets hunch of rebel or she simply doesn’t like anything. The queen Zyra is raging with madness of power. There is no one who can defeat her and put an end to her evil deeds.

However, with time and the help of others Adaire realizes that she has the power of water. She can put the fire down and it is her destiny now to end Zyra until then she cannot return to the human world. The novel is captivating right since the first page and it promises more thrill and excitement when Adaire and her team confront one of the oldest queens who has a magical dagger to finish Zyra.

People searching highly imaginative fantasy novels like Harry Potter or Narnia can definitely pick it up. Stretching up to 162 pages, it sounds nothing less than a saga. One thing is sure that the teen author is full of imagination, producing such a wonderful novel with a cliffhanger ending is something takes time and age…but Anagha achieves at just 12. Wow!

Read on the novel to know the exact fate of Zyra? Will Adaire be going back to her world after finishing the task or something else is stored for her. Written in lucid language, the story is perfectly stitched and connected. The pace of the novel is fast and entertaining…one must not wonder if it is taken by Netflix for a web series! Good job Anagha…the world is waiting for your talent…keep writing! A highly recommended fantasy novel!