The Flute Player by Ruskin Bond is a short story. Probably, this is the first story by Ruskin which is not staged against the backdrop of the Himalayan foothills. It’s set in Jaipur. The story starts with Kamla. She has come to Jaipur from England on summer vacation to live with her grandmother. Her parents live in the UK, where her father works as a doctor. After the summer vacation, she will go back to them in the UK and resume studies in the school. 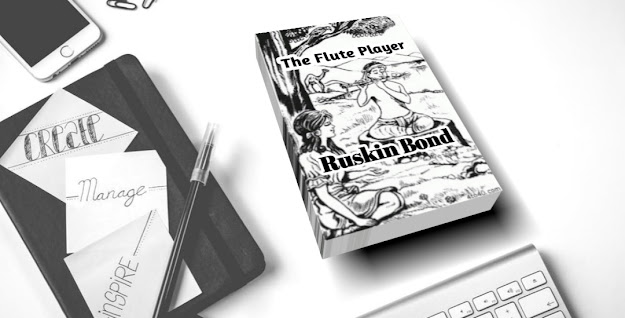 Kamla’s vacation in Jaipur are numbering out, in a few days she will be going back, but she is captivated by the life portrayed on the other side of the main highway road, this road divides the city into parts – urban and village landscape. She lives in the city part but wants to see that side of the road which looks green and swaying with the fields and farms – a sort of countryside for her.

Like many other Ruskin Bond books where the child protagonist gets curious to know more about other than his/her immediate premise, in this story, too, Kamla secretly gets out of her home one afternoon and crosses the road and reach in the fields. As Kamla walks ahead, she is enticed by the village and farm-related activities and beauty of the farmlands. At not so far distance, she gets the attention of a camel tied to a well, it is going round and round and drawing water from the well. The sight bewitched her.

Next, under a mango tree, she finds a boy her age sleeping in tattered and dusty clothes, with a flute beside him.

As she nears his face, the boy gets up in trepidation and asks for her name. ‘Kamla’, she replied. The boy introduces himself as Romi, the guardian of the camel, and a flute player. He plays flute to show his skills and when Kamla tries to play it, she fumbled and sounded funny. Nevertheless, they gel well.

Since Camel is on its own, Romi is not heeding much at it. They both talk for some time and eat mangoes, and then go to explore the farms, the canal, and the nearby verdant area.

While walking towards the canal, they spot a pair of blue jay birds. The birds remind Kamla a story from her grandmother, she says, ‘They are sacred birds, aren’t they? Because of their blue throats.’ She told him the story of God Shiva having a blue throat because he had swallowed the poison that would have destroyed the world; he had kept the poison in his throat and would not let it go further. ‘And so his throat is blue, like the blue-jay’s.’

Romi liked Kamla’s story. Suddenly, a small grey squirrel runs across the path. Romi said that even squirrels are sacred. He then narrates a story related to lord Krishna: as how Krishna was fond of squirrels, he would stroke them and take them in his hands. That’s the reason squirrels have dark lines across their backs.

Romi gets into the water of the canal while Kamla walks along the bank while handing his flute. Kamla is scared of water. As the day was about to come to an end, she plans to go back home. They chat about the plan. Romi is saddened to know that she is going to the UK in two days. He curiously asks about the UK and travel. He gives his flute to her and she promises to visit him next year or the year after next. Romi watches her as she walks back home.

It’s a fascinating story of two children hailing from two contrasting backgrounds. But children are good at heart. They just try to gel up with each other, leaving all worries of worldly affairs at bay. The story also portrays as one needs to be pragmatic to part away with strangers who come into life for a short period of time. They were strangers to each other but parted as they were friends since ages.