May 27, 2020
Sher Singh and the Hot-Water Bottle by Ruskin Bond is a very interesting short story placed, as usual, against his favourite backdrop–foothills of the Himalaya. This story, spiraled from his own experience, is placed against the emergency time imposed by then PM Indira Gandhi. It’s around 1979-80, the mood in Landour, a small place in Mussoorie, was little gloomy owing to impose bans on liquor shops. Ruskin lives there in a small cottage that leaks so often. It’s winter and without liquor it was getting difficult for people to keep themselves warm and cozy. 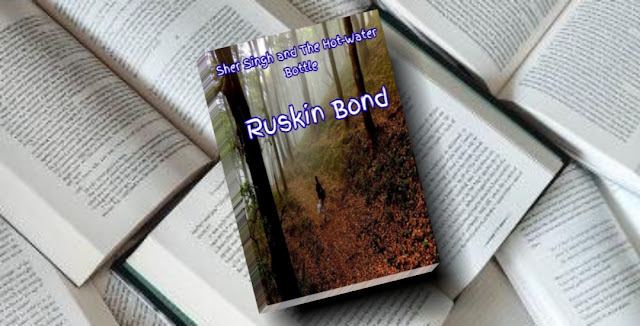 One morning a known milkman of the area Sher Singh noticed the somber mood of Ruskin. Next day, Sher Singh asked a bottle of warm water from him. Ruskin gives him only one. Sher Singh, other than being a milkman, also begins preparing local liquor using some castor oil and turnips. It came out something frenzy. As it unfolds, people whosoever consumed it begin acting in clumsy ways, so much so that a retired judge fell in love with a Dhobi’s sister, one woman runs away with someone to Harsil village and much more. The silent somber Landour becomes abuzz with activities and mirth that invited the police attention. Even the police are sent into some strange bewilderment. The liquor made by Sher Singh becomes famous and he too became famous with it.

As the days passed, Ruskin didn’t see Sher Singh for some days. He goes to his village Solti only to find that he was attacked by a bear who drank his liquor. Sher Singh was all covered in bandage and somehow managed to survive when the bear attacked him in a drunken state. One generation passed on, Ruskin grows older but he still remembers the errands of Sher Singh. Now Sher Singh’s honest grandson sells milk to the cottage colony people, with no water in it.

Since Ruskin is old, he cannot walk to the village of Sher Singh. To pay off tribute, one day he hands over a warm bottle to the young milkman for Sher Singh. The bottle has some top-quality English liquor for the old man.

The story is quite short and a sort of reminisces from the author’s diary of memories. Simple and sweet and amazing, Ruskin Bond’s writing style hardly changed over the years. He is a mood soother–pick up his books and find yourself in a magical world, with no whims around.