Author Highlight: Manoj Kumar Sharma Discusses his Novel ‘Mirrro at the Weird Wayward’ and Stories from his Life

April 21, 2020
We are delighted to welcome a very promising novelist Manoj Kumar Sharma for a brief Q & A session at our website about his Amazon Bestseller novel ‘Mirrro at the Weird Wayward’.

In this Q & A session, he will be talking about his writing aspirations, inclination towards offbeat fiction, and much more. Stay on...while we chat with him. 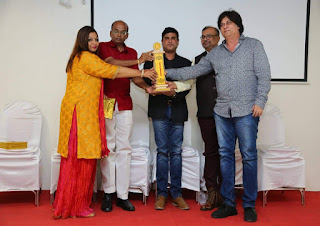 Nearly all opined that the title of the book is good but tough to type or spell? What do you think about this?

The title, content and essence of this story have one common element – weirdness. So, while finalization, I decided that the presentation of the title should also be something unique, which must resemble with the overall essence of this story. So, thus the inverted letters came into picture, which readers felt intriguing also.

But, one thing I learnt later and realized, that search-ability got affected because of the inverted letters in the title. Let’s see in the sequel, how that problem could be solved, without disturbing its originality.

As far as issue with – how to spell? So, in sequel I will try to solve it.

Your book has received very popular awards and it went on to become an Amazon Bestseller! How were you feeling then?

The feelings of receiving awards unexpectedly are just inexplicable…

But, definitely, awards motivated me and boosted my morale. Earlier, I was not that much pleased about my creation, but, awards changed my perception.

Thanks to the readers and their reviews, which made it happen. The credit goes to the readers, well-wishers, Maa Sarasvatiji, Muse, and last but not the least – the mysterious MIRRRO…..

And, as far as becoming Amazon Bestseller! Yes it happened, but, very short-lived for few days only, that also while Kindle Book promotions by Amazon as Free Kindle Book. Honestly speaking, rather openly speaking, though I felt happy at being the short-lived Amazon Bestseller, but, that wasn’t what I aspiring for. My selfish aspirations kept on scratching me like hell for becoming Bestseller with inclusive consistency…….Let’s see what happens?

Do crimes in our societies trouble you psychologically?

Definitely. The Time & Energy of such a great Nation is being wasted in crimes of all kinds – conventional or innovative, and, which are roadblocks in its efforts for inclusive growth.  Whether it’s a direct crime or religion coated, politics coated, fragile humanism coated….all are equally detrimental to Nation’s growth and image.

History depicts that in ancient ages, India, had been the only well grown up civilization, whereas those days people in other parts of the world were living life like cave dwellers. And those ages old Indian Civilizations had most of the things what in today’s world we are having, but, either crime rates were miniscule or stringently controlled….and that factor supported the then Indian Society to achieve and continue in maintaining consistent inclusive growth, up till disturbed by the crimeful invaders.

Those invaders further committed crime against the Indians and their social fabric, by converting the original Indianness into various newly born religions and then dividing them into Hindus, Christians, Muslims and that is still paining India every now & then. The unity in diversity existing on papers and very much fragile when the challenging moments come, the real hidden faces exposes each other.

In today’s society any conventional crime like murder, theft, dacoity, all crimes against woman – sexual molestation, rape, acid attack, gender discrimination, corruption, all kinds of abuses – abuse of children, abuse of elderly, abuse of natural resources, abuse of animals, mob lynching, unruly conduct, terrorism, war against the state, treason, etc, etc, and above said religion-coated crimes all are either way severely detrimental to the aspirations of growth of this Nation, despite having great potential compared to any other nation in the world.

So, any form of crime, whether small or high profile, deteriorating the synergy of growth of India. And, if one think seriously, it pains, more than any personal pain……..

How do you see India as a strong character? How did you draw her characterization?

The Character ‘India’, actually symbolizes with the nation ‘India’ up to significant extent.

This character is naturally evolved character in this story, representing the Iron Woman of India, who is exhibiting all positivities, but, at the same time not hiding her negativities.

In this story, at different occasions and in different situations, the way the character ‘India’ behaves, presents herself, that’s make her a lovable character, who is having all desired ingredients –gracefulness, modesty, magnetic eyes, mesmerizing voice, patriotism, nationalism, art of life, art of restrain, strong foresee, physical & mental strength, determination, full of knowledge & wisdom, caring, supportive, matured, risk taker, forgiveness, balancing with generation-gap syndrome, many others.

In fact, more than I was drawing her characterization…..it was she, who organically shaped the shades her own character, as per the situations and needs of those moments…..

What motivated you to write this book?

Reading and writing stories were my childhood hobbies. Those days, I used to rent story books of all genres from Libraries, and, used to read a lot. At the same time I used to participate in story, essay, and poetry writing competitions also. While all those childhood activities, the feeling of writing my own Books/Novels/ Poetry inculcated with time……

So, writing my own book was my childhood aspiration, which never happened throughout my life, from schooling-to-college-to entire professional life. Reasons were many, but non-excusable. So, it was not an overnight mood swing, but, peculiar mix of ignitions, sedimentary & metamorphic aspirations.

And as far as the motivation behind writing this particular book as my first book…..No! There were no reasons at all. It happened with time. May be I can say, MIRRRO won the race of my family of Books, many yet to be born……..

Are you coming with a sequel of the novel?

Yes, right now I am working on its sequel. Let’s hope to be published by this year ‘end.

How do you manage your life and time being an author?

Mirrro, I started writing few years back in 2012, when I was doing job. And completed after my retirement in 2019.

So, in retired life, after Mirrro, now mainly I have only one work – writing. There is no other work, more significant than this.

But, I didn’t make any hardcore plans or targets. Just flowing with the flow of life amidst breezes, clouds, birds, butterflies, rivers, rains, nature & time, but, right now in Lock Down out of Corona Pandemic.

How did your colleagues and seniors and friends and relatives react when you published this novel?

Everybody was more than happy for me and MIRRRO.

What is your biggest aspiration and inspiration as an author?

Biggest aspiration - To become a Best Seller Author with inclusive consistency, and, a loved author by readers and even by critics also.

Biggest inspiration – To convert the received signals from cosmos as ideas, into reader friendly and society friendly stories with unexplored colors, textures, shapes, smells, tests, voices, feel, but, with innovatively enlightening messages to the society.

What are you working on next?