Book Review: Those Were the Days by N.S. Ravi

March 05, 2020
Those Were the Days by N.S. Ravi is a promising read. Written in a letter form, this work of non-fiction is anytime more riveting than a fictional copy. What’s so special? Well, the book is about India – the author has beautifully captured the first 50 years of a country after its independence. Today’s young people may not have seen what all India went through and achieved in last 50 to 70 years, but N.S. Ravi was there. He was enjoying and experiencing, and of course noting it all down to pass on to his next generation i.e. his daughter and son (Vinthu and Vinayak). It’s mere not a book but a sort of unspoken legacy that he has managed to pass on successfully. 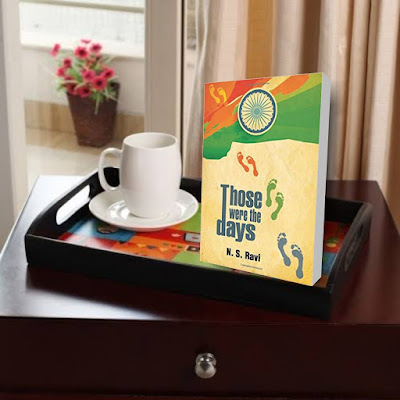 As one delves deep into the book, one chapter after another, you will be enthralled to know that the author himself is a well-qualified person to write this book, because throughout the book he mentioned about his sojourns in Africa, Europe, and other countries. With time, probably he saw India growing as a nation from just-got independence to developing nation, like a father who watches his children growing from nascent to adulthood.

The more you read, the more you feel like living into the good old days. That time everything was fun and had its own peculiar charm, thus, he titled it ‘Those Were the Days’ and this term has been repeated throughout the book. In total, there are thirty short good chapters in the book – in fact these are the letters written to his son and daughter. He wanted them to know what India was when they were not born or growing up. More or less, the book holds the voice of a common man which collectively and ultimately shaped the future of our nation. You will be delighted that the author had put no political or objectionable content – it was as pure as nature’s sunlight – holistic and bright. That’s something good about N.S. Ravi.

The dazzling points in the book are personal experiences and memories spiraling out from his and others lives. Be it any chapter, whether on train, flight, music, boss, property – the insights are valuable and worth noting down. How did Maruti cars appeared in the Indian markets, why did calculator operators held good jobs then, did you know how Hamaara Bajaj became Maara Baja, Tamil schools in Delhi, beer offerings in the Indian flights, when was Rajdhani trains introduced and much more, probably if you Google all this, you may not get proper or serialized answers, but this book has all for you. Simply, it is a powerful book, especially who think that India has achieved nothing in last 50 to 70 years or people doing research on India as a country.

Since the book is epistolary in nature, a touch of personal aspirations and aspects has been delivered perfectly. This is N.S. Ravi’s first non-fiction work, but it looks as he has been into literary arena since ages. His wisdom and choice of lucid language usage is evident from the comfort levels of readers, indeed a much appreciated book for all sorts of readers.