Book Review: I am in Love with a Shudh Desi Firangi by Dipnanda Bhaduri Roy

January 22, 2020
I am in Love with a Shudh Desi Firangi by Dipnanda Bhaduri Roy is a captivating romance novel with doses of religious spirituality. The novel is built around the lead character Kattyayani (Katty) Chatterjee. She is simple, sober, academically brilliant, and to some extent the pride flag bearer of her family. However, her only mistake was that she fell in love with a wrong guy…yes…you heard right? Just on the day of her examination, she gets the breakup news. Her six-year-long boyfriend Arnab breaks with her. The reasons are her coldness and lackluster in overall grooming and so on. 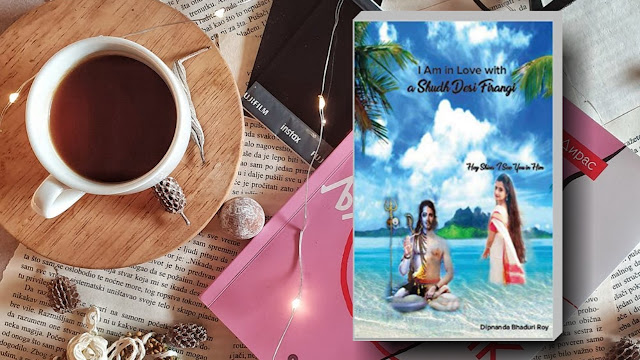 Anyway, post the breakup, like many other girls, she too felt depressed and got a little diffident on the topic of love. The initial part of the novel deals with tension and depression, a kind of melancholy lingers. Surprisingly, there was no weeping and wailing from the girl’s side.

With family history, cultural ethos and beliefs, and Calcutta as a backdrop, the novel chugs ahead silently. It’s to be noted that to some extent her family, owing to joint living, is conservative and marriages outside religion or state are not reckoned with a sense of blessing. On the other hand, one of her Aunts Binota married a Christian and settled in Goa. She is being accepted after two decades when all is rich and fine in her life. There is nothing negative about the family values as they fear about social security when a girl tries to go outside her realms. So, the burden on Katty is right. But can she control her feelings if she fell in love again…not with a Bengali guy…but someone else?

The middle phase of the novel takes us to Goa and Katty is there at her aunt Binota’s house. There she stumbles upon Rudra, a white foreigner. The chances of being in love resurface again for Katty. Will she be up again? The eulogy for the lord Shiva runs like banter throughout the novel. Seems like Katty is Shiva fan – she cares for prayers, chants, virtues, belief and much more. In Rudra, she sees some reflections of lord Shiva and this brings her close to him. But well before that, in the novel, there have been many back stories, sweeps, and sub-themes. All round up for a riveting read.

Filled with thrill, suspense, drama, and feelings, the love story begins simmering. Will she be able to get the love of Rudra – who is he, what country does he belong to, is he really a Shiva follower or just another gimmick in the heat of Goa’s tourist culture? As a reader, you will be enthralled to know the tenacity and endeavors of Katty to find her man of dreams and veracity. Will she succeed or land up in another dead end? Above feelings and everything else, can the young lovers overtake the barriers laid out by social stratification? Can love win and survive – over all boundaries and barriers?

Dipnanda Bhaduri Roy is a capable author of romance genre. This novel turned out to be a smooth one, anyone could finish reading it in one go. Her way of shuttling stories from one backdrop to another and narration skills are impressive. For romance readers, it definitely is a good read.
In Interview with Dipnanda Bhaduri Roy.