April 30, 2017
Bowen Tyler is an American hailing from ship-building business family. But his interest lies in aviation so he sets on a sail to join Lafayette Escadrille – French Air force run by volunteer pilots from America in the WWI. En route France the passenger ship, in which he is journeying with his dog - Nobs, is attacked and destroyed by a German submarine. It is a U-boat. Bowen immediately identifies that the sub was made in his shipyard. 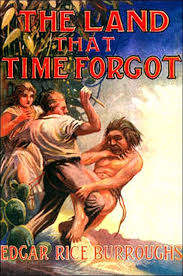 Amid the disaster, he and his dog manage to survive in a small boat. He also picks up a young girl called Lys La Rue. Next morning they are picked up by a British tug boat but soon the boat is attacked by the same German U-boat. This time the crew of the tug boat gives a hard-hitting fight, though loses some of its men, and captures the submarine. The German crew is taken as prisoners. German’s captain – Von Schoenvorts – turns out to be Miss Lys La Rue’s fiancée. In the aftermath of the attacks, she changes her mind and abhors him and sticks to Bowen. Bowen likes her but hesitates to express his love.
Bowen and other crew members try to port in the English waters, they also send the codes and messages, but they are threatened to get killed by the British navy. They fail to convince that the sub no more belongs to Germans. Having nowhere to go, they are lost and astray in the sea for many months before reaching to an enigmatic island, Caspak. The place looks contrary to the world they are coming from. It is full of strange things like ape-like humans, monstrous and ugly reptiles, big flying lizards, etc. To fight the difficulties of that strange place, the British and German crew joins hand and vows to fight together.

There they struggle for food and fresh water and also put up a temporary fort to stay away from deadly creatures. One day Germans flee the island on the U-boat, leaving Bowen and others in the lurch. Later some of the men go missing and Lys La Rue is kidnapped by a tribe. Bowen goes alone to set her free. Their hope of returning to their world diminishes and thus Bowen and Lys get into marriage and start living in a cavern at one of the mountain tops.


The book is based on Lost World genre. Too many characters and incomplete WWI settings make this story fall short of intensity. Though the story is fast paced but fails to convince the readers with numerous unexpected sub plots.