Book Review: A Farewell to Arms by Ernest Hemingway

April 25, 2017
The First World War I is on. In the Alps Italy is busy stopping Austro-Hungarian Empire to merge with the German army. Italian army is aided by America, Britain, France and Russia. Among many soldiers, one is Lieutenant Frederic Henry, an American, posted in Italy; his main job is to oversee a group of an Italian ambulance drivers. 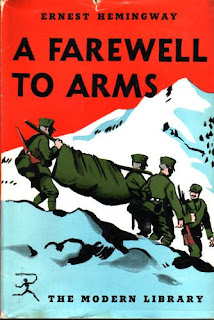 Rinaldi is not only a surgeon but his friend and roommate as well. One evening he takes Frederic Henry to a hospital to introduce him to two British nurses: Catherine Barkley and Helen Ferguson. Henry and Catherine discuss war-related aspects, and she tells about her fiancé’s loss, which was killed in France the previous year. In a matter of a few meetings, they become lovers. Initially Frederic hesitates to involve in a serious relationship but it happens gradually.

During duty one night Henry and his fellow ambulance drivers hide across a river bank, from the opposite bank Austrian troops begin bombardment, as a result Henry wounds in the leg. He is immediately transported to an American hospital in Milan, where Catherine has already been transferred. They meet once again. While recuperating Henry and Catherine spend the summertime together, but before the summer is over he is send back to the front.

At the front Austrian army gains the support of the German army and they break into the front; as an upshot, Italian army retreats. Henry and his team pick up two Italian sergeants for help and begin moving slowly with the troop. When they left the trail and come off road, their vehicles stuck due to rain and mud. The two sergeants refuse to help them. This act angers Henry and he fires at them both. Henry and his team leaving the main convoy begin walking along the Tagliomento River. One of his colleagues dies in a misfire and the other runs to surrender to the Germans. Henry being alone and after discovering that the military police is killing the soldiers who retreated, jumps into the river and swims downstream. He walks the plain and boards the train in disguise and manages to reach Milan to find Catherine.

But she and her friend Helen are on vacation in the resort city Stresa. To search them, he travels to Stresa on a train. He finds them both but at the same time gets the hunch that he will be arrested soon for leaving the front in the middle of battle. Therefore, Henry and Catherine leave the town and escape to a neutral country Switzerland, in a boat. Catherine is pregnant. After spending a pleasant winter, they come down in a hotel in Lausanne. When she goes into labour, Henry takes her to a hospital where their son is stillborn and Catherine dies of hemorrhage.