Book Review: In the Flickering of an Eye by Neelam Chandra Saxena

February 23, 2017
Divided by clan taboos, united by the vagaries of fate, Neelam Chandra Saxena is back with bang.  In the Flickering of an Eye, Vinay and Manju: the lovers from ordinary landscape endure an extraordinary love tale. 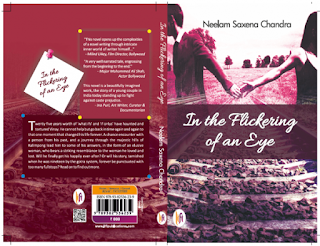 Vinay, a shy teenager, holds a competitive rivalry against the much-hyped, tomboyish girl Manju. However, things between both begin changing following a cuddle up during a torrential rain. When Manju deliberately looses a volleyball game to save the thinning dignity of Vinay, he finds himself in love with her.  Though they both hail from simple and mediocre families and are also closely tied by means of neighbourhood goodwill, ritual exchanges, and family friendship; but their love story is not going to be simple, well-staged and easily convinced.

Since they belong to the same Gotra (clan), subsequently their love affair cannot head for a successful marriage. That is the only hurdle. Nevertheless, they continue their affair despite knowing the risk. Lovers of the same clan from their village either elope successfully or get killed by the village jury (Panchayat). One day their rendezvous is being busted by Manu, the girl’s repressive brother. Subsequently, Manju goes through emotional torment and compelled to get engaged with a guy whom she never liked. Vinay in full defiance proposes a plan to elope to Delhi.

As per the plan, everything seems working fine for them, just as when they were ready to board the train, the villain Manu appears with his gang of rogues with an intention of killing both. The couple musters up the last-moment courage and fights back enough to run hither thither from the hands of the chasing villains. In the process, they both board the oppositely moving trains and part unwittingly.
Twenty-five years passed but Vinay’s quest for her is still on. After struggling as a stranger in a city like Delhi, he shots into fame with his debut novel. To start a fresh book when he turns up at Kalimpong, a beautiful hill station, he chances upon a widower called Rohini – who is not only the owner of a famous hotel but also bears an incredible resemblance to Manju. Vinay tries to dig her past life up but fails to do that. However luck favours him as, when, he overhears her murmuring his name during a feverish comatose. In the end, they both unite and go to their village to see the vestiges of their past lives and relatives, which they left behind twenty-five years ago.


This world is divided over borders, religions, caste and creed, but not for lovers like Manju and Vinay. The story may sound familiar, but at the same time it is infused with goodness and optimism. It is a heartbreaking tale of love, partition, and reunion.