Book Review: The Monk Who Sold his Ferrari by Robin Sharma

October 09, 2016
The Monk Who Sold his Ferrari is a very engaging fable which teaches as it delights. Through the chief protagonist Julian Mantle’s life story readers come to know the timeless virtues of enlightened living. Through the use of symbols, Robin S. Sharma has been able to objectify and deepen the teachings which otherwise may have seemed as dull morals. With the revelations of Julian Mantle the meaning of life is revealed to the readers. In the story Julian gets a wake-up call, a massive heart attack which was symptomatic of materially-sick life. He ventures into the timeless tradition of the East. He meets Yogi Krishnan of Kashmira in India and learns from him that every event has a purpose and every setback its lesson. He also learns that life is all about choices. One’s destiny unfolds according to the choices one makes. 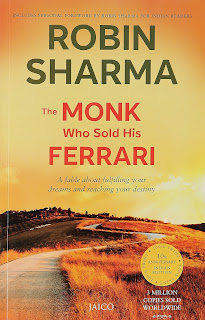 He finds Yogi Raman, the chief sage of Sivana whose life was one of simplicity, serenity and harmony. From him, he learns that self-mastery and the constant care of one’s mind, body and soul is essential to find one’s highest self and living a life of one’s dream.

The Sivana system taught him about seven basic virtues, which embodied the keys to self-leadership, personal responsibility and spiritual enlightment.

The first virtue teaches him to master his mind, for mind management is the essence of life management.

The second virtue of the Sivana system said that the purpose of life is a life of purpose. It also teaches him how to have a goal and how to attain it.

The third virtue taught him to practice Kaizen, the Japanese mode of meditation for self-mastery.

The fourth virtue is one of discipline. Many skills are suggested to maintain. One of the says, basically by keeping silent for a day, you are conditioning your will to do as you command it to do; each time the urge to speak arises, you actively curb this impulse and remain quiet.

The fifth virtue establishes time as the most precious commodity also because it is non-renewable. Yogi Raman teaches many skills to Julian to maintain his time consciousness. One of them begins: what would I do today if it was my last? Then think about how you would treat your family, your colleagues and even those who you don’t know. Think about how productive and excited you would be to live every moment to maximum.

The sixth virtue talks about the ultimate purpose of life which echoes through William Black’s line everything that lives, lives not alone, not for itself. The protagonist substantiates, the quality of your life will come down to the quality of your contribution.

The seventh virtue is the timeless secret of lifelong happiness which comes from embracing the present.