May 11, 2014
India in spite of her variety and complexity is a cultural unit. She stamped an image of her own culture. Culture is an exploratory term, which advocates the sum total of all that is reflected in the mode of life of people – their thought processes, attitudes and outlook towards life, social structure, infrastructure, values, traditions, customs, their requirements, aims, aspirations, ambitions and national commitment and then this is best expressed through arts and letters of the country. Best measurement of culture of any nation is possibly only through her literature. Literature represents the inner and outer life of a nation. 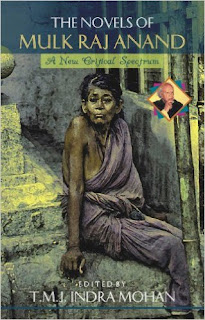 Indian English literature began as a byproduct of eventful encounter between vigorous and enterprising Britain and a stagnant and chaotic India. This encounter is, “India, withered trunk…suddenly shot out with foreign foliage.”  One form of this foliage resulted in original writing in English by Indians.

The most significant event in the history of Indian English fiction in the 1930s was the appearance on the scene of its major trio: Mulk Raj Anand, R.K. Narayan and Raja Roa, whose first novels were published in 1935, 1935 and 1938 respectively. Mulk Raj Anand – the eldest of the three, has also been the most prolific. He was born in Peshawar (now in Pakistan) in a Hindu coppersmith family. In his Apology for Heroism (1946) he narrated his upbringing.

“I grew up, like most of my contemporaries, a very superficial ill-educated young man without any bearings.”

While at college, participating in Gandhian movement, he suffered a brief imprisonment. In 1924, he sailed for England for doing research in philosophy; there he became interested in the study of Indian art. He also came in touch with avant-grade movements and left wing politics. On his return, he founded in 1946 the art magazine-“Marg”, which he continued to edit. Endowed with untiring energies he is actively associated with numerous literary and cultural associations both in India and abroad, besides, engaging himself in social work. His fiction is shaped by what he himself narrates – “The double burden on my shoulders. The Alps of the European tradition and the Himalaya of my Indian past.”

Anand’s attitude is ambivalent to his Indian past, he is indignantly critical of the deadwood of hoary Indian tradition i.e. its obscurantism and fossilization. He is equally aware of the finer and enduring aspects. Anand derives his fervent socialist faith and his vision of a modern equalitarian society from a fictional chronicle in which his eclectic humanism and his humanitarian compassion for the underday are persistent themes. Both these themes find their best fictional treatment in his first novel Untouchable (1935), which narrates an eventful day in the life of Bakha, a young sweeper from the outcastes’ colony of a North Indian cantonment town. This particular day brings him his daily torments but in the end it also suggests three alternative solutions to his problem:

In 1932, when Mulk Raj Anand returned India, for some time he lived with Gandhiji at Sabarmati Ashram, Gandhiji asked him to write a pamphlet against untouchability. Anand being a novelist, preferred to attack upon it through the medium of the story. The manuscript, refused by nineteen British publishers was last published in 1935. In the same year, he represented India at the International Writers’ Conference against fascism and in 1936 he joined the international Brigade in Spain during the Spanish Civil War. His merit came to be recognized in 1952 when he was awarded the International Peace Prize of the World Peace Council for promoting understanding among nations through his creative works.

A novelist, as a matter of fact, can best portray the life, which he himself has lived. He understands it thoroughly and makes a convincing portrayal. A writer’s views and attitude which conditions his work are the consequences of a number of influences; same is the case of M.R. Anand. He is one of the most prolific Indian novelists. He innovated the technique of the Indian English novel and short story.

The life and career of Mulk Raj Anand can conveniently be divided into three phrases:
This division corresponds with his development in literary career. The first phase reveals various strands that go into the shaping of his mind and influences that reflected in his writings.

A queer mixture of reality and dream is what we find in his novels, which express his experience and imagination. He is a dreamer who strives hard to make his dreams a reality. His novels are a philosophical depth. For him art is the tool to serve humanity. As his ‘Untouchable’ shows the evils of caste-system along with a “Panacea for this social malaise.” Undoubtedly, he is a missionary-artist. His crusading zeal for reformation and the amelioration of the poor plight of the social underdogs has given his novels an extraordinary interest.